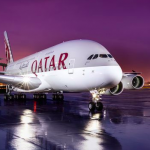 Qatar Airways has warned today (May 6) of “substantial” redundancies as it struggles with a collapse in demand.

Its chief executive Akbar Al Baker wrote to staff warning of the job losses, although the airline has not revealed the numbers.

Qatar Airways said it needed to “act decisively to protect the future of the business”.

Worldwide it employs 45,000 people and runs a fleet of 240 aircraft – described as one of ‘the world’s youngest airline fleets’.

“The truth is, we simply cannot sustain the current staff numbers and will need to make a substantial number of jobs redundant – inclusive of cabin crew,” Mr Al Baker wrote in an internal memo.

The state airline of the wealthy, gas-rich Gulf country was considered less vulnerable than many Europen and US airlines but today’s news indicates the depth of damage Covid 19 is causing to the sector.

Qatar Airways increased its stake in British Airways owner IAG to 25% as part of its strategy to invest in other carriers.

“The unparalleled impact on our industry has caused significant challenges for all airlines and we must act decisively to protect the future of our business,” a Qatar Airways spokesman said.

“As a result, Qatar Airways can confirm that the airline will make a number of roles redundant due to the impact of Covid-19.”

The International Air Transport Association (IATA), warned last month that air traffic in the Middle East and North Africa was forecast to fall by more than half.

IATA also warned that most airlines would struggle to make a profit if social distancing measures were introduced, such as keeping middle seats empty.

On Tuesday, Virgin Atlantic said it would be cutting 3,000 jobs and quitting its operations at Gatwick airport.