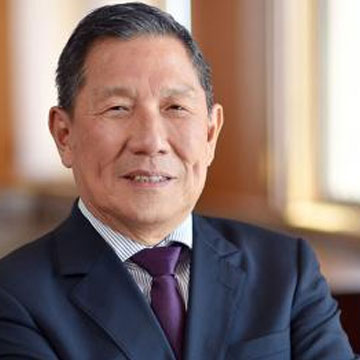 Georges Chung Tick Kan was trained as an economist and holds a Master degree. He is a seasoned entrepreneur and the businesses he set up encompass several sectors including printing and publishing, woven textile labelling, industrial packaging and global financial services. He chaired or was member of boards of Government bodies such as the Financial Services Promotion Agency, Export Processing Zone Development Authority, Mauritius Broadcasting Corporation and Mauritius Duty Free Paradise. He also chaired the Committees charged with the setting-up of the Stock exchange of Port-Louis and the first Leasing Company in the 1980s when he was adviser to the Ministry of Finance.

Mr Chung also chaired the Mauritius Association of Exporters at the beginning of the Great Recession of 2008. He was the economic Adviser to the Minister of Finance in 2010. He is currently the Senior Economic Adviser at the Prime Minister’s office. He wrote a book on Vision 2020 and Ways of Achieving a Society of Quality. Ceo Tourism Intelligence and former CEO AHRIM
This page is currently under construction. Please check back this article at a later stage. Dr. Catheryn Khoo-Lattimore is an international expert on women and children in tourism. She has recently co-published two books: Women and Travel: Historical and Contemporary Perspectives; and Asian Genders in Tourism.

Her work has been published in international journals and that specifically on girlfriend getaways have been featured by travel sites, radio and newspapers. Catheryn also speaks frequently at corporate training programs, international conferences, lectures, seminars and workshops all over the world. She is the Second Vice-Chair of The Council for Australasian Tourism and Hospitality Education (CAUTHE); Editor-in-Chief of international journal, Tourism Management Perspectives; and the proud founder and chair of Women Academics in Tourism (WAiT).

She researches at the Griffith Institute for Tourism (GIFT). Catheryn has started and sold businesses for profit and has experienced consulting for institutions and organisations, and lived and worked in Malaysia, New Zealand and America. She is settling for now, in an Australian bayside suburb.