– COVID-19 has grounded airlines all over the world. These four charts show the industry’s main challenges now and in the near future.

– Quarantines, economic recession and health fears are likely to continue to weigh on passenger numbers.

– Record losses have already forced governments to step in – but continued support may be tied to conditions around financial soundness and environmental sustainability.

The COVID-19 crisis has grounded airlines and halted air travel all over the world, with economic consequences that are rippling far beyond the sector. Here are four charts that show the main challenges faced by airlines right now – and the dramatic changes we could see in this vital industry.

Airlines are facing record losses, not just this year

Airlines around the world are expected to lose a record $84 billion in 2020, more than three times the loss made during in the Global Financial Crisis, according to the International Air Transport Association (IATA).

The global economic recession and travellers’ fear of catching the virus are likely to continue to weigh on passenger numbers, even as travel restrictions are starting to ease. Business travel is also expected to remain sluggish, with companies noticing the cost-saving impact of video meetings and online conferences. Such savings will be all the more welcome in a difficult economic climate. Airlines are therefore still expected to lose $16 billion in 2021, and that’s assuming there won’t be a second wave of COVID-19 infections in the autumn and winter. 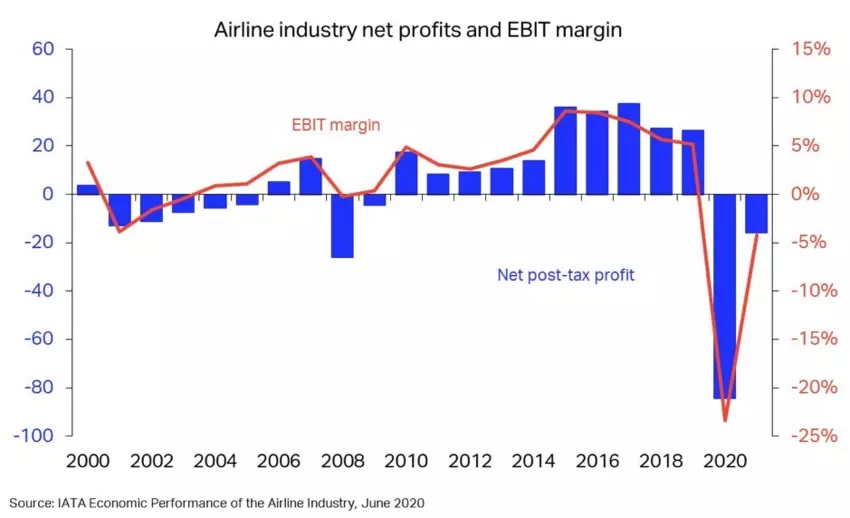 Countries are starting to admit foreign visitors again, but this is often coupled with the condition of quarantining for two weeks after arrival. For airlines, the change is unlikely to result in a recovery of passenger numbers. An IATA analysis shows similar drops in flights under full travel bans, and entry with quarantine. This makes sense: tourists are more likely to stay at home than spend their entire holiday in quarantine, and for the typical one- or two-day business trip, the set-up doesn’t work at all. This makes the sector’s recovery even more complicated in the longer term. 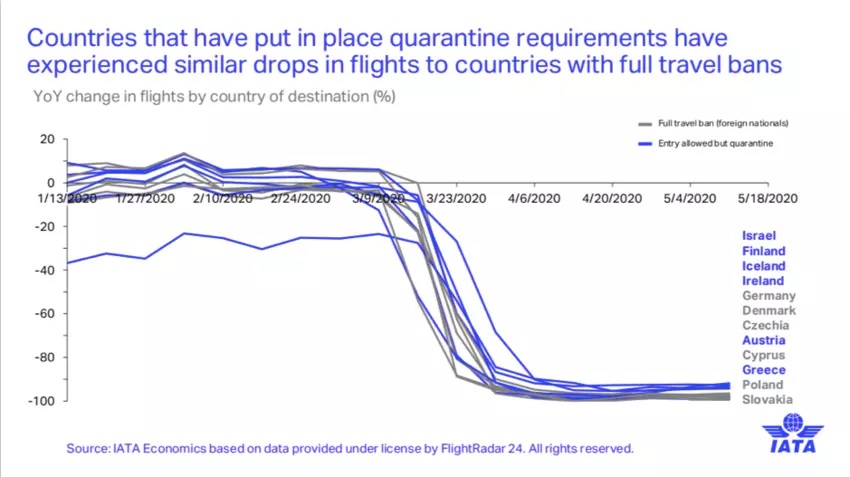 One alternative to quarantine measures are so-called travel bubbles or air bridges, meaning that countries with low infection numbers group together and allow quarantine-free travel between each other. Such agreements may somewhat help passenger numbers, but they don’t change the fact that global travel will remain limited for the foreseeable future. Also, the agreements are likely to change over time depending on whether certain countries experience second waves or even localised outbreaks.

Tourist arrivals could plunge by 1 billion this year, according to a projection by the UN World Tourism Organization. The knock-on effect on the wider economy would be disastrous. The travel and tourism sector contributed 330 million jobs or 1 in 10 jobs worldwide in 2019, and added $8.9 trillion to global Gross Domestic Product. If current travel restrictions only start to ease from September, that contribution could dive by 62% to $5.5 billion in 2020, and more than 197 million jobs worldwide could be lost. 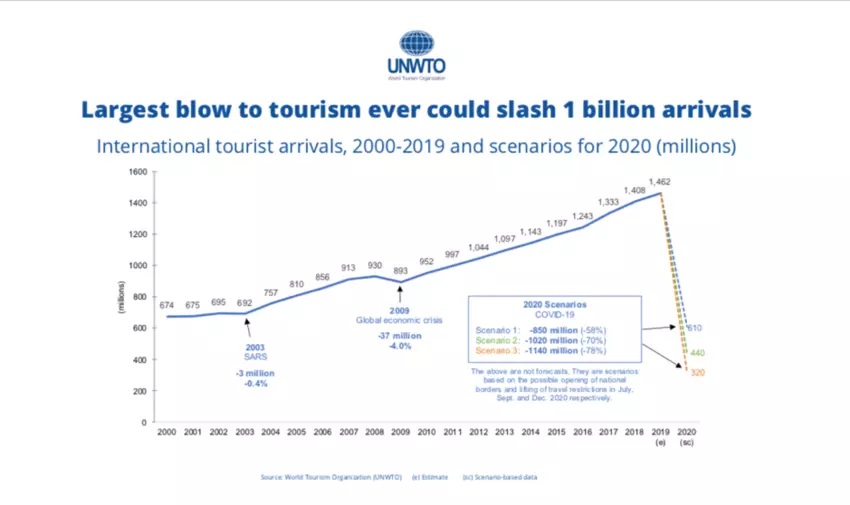 A recovery of the tourism industry will only be possible if airlines are still there to welcome passengers once they are ready to fly again.

Given these catastrophic scenarios, coupled with the broader economic and strategic significance of airlines, governments will have to step in to support them through this crisis and in all probability, beyond.

Governments are bailing out airlines – but are they supporting the right ones?

Governments have spent $123 billion to support airlines, and will probably have to spend more as the sector’s problems drag on. However, rather than limiting their help to airlines that were financially sound before the crisis, governments have mostly handed out aid without taking into account the businesses’ long-term viability. This is worrying, because the current state aid (which is creating debt rather than equity) will add to airlines’ debt levels. Once the pandemic has passed, some airlines may fail anyway, crushed by debt and poor management. 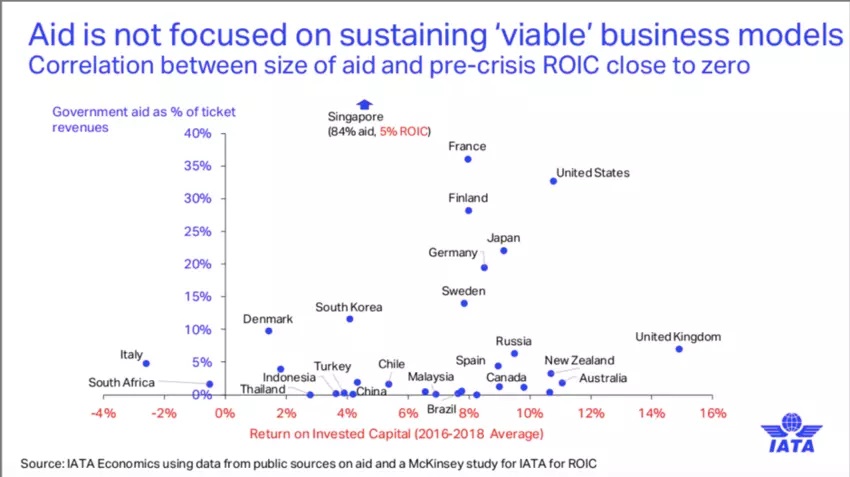 An opportunity for the sector?

As governments funnel more state aid into airlines, they are likely to start demanding something in return. One possible scenario is that they will switch to supporting only airlines that were well-managed and financially sound before the crisis, and that are vital to national interests. Failing airlines may be forced to overhaul their business models and management. There have already been calls for governments to support only financially sound businesses across a range of sectors, as anything else would lead to an uncertain and unsustainable economic recovery.

There could also be a broader, positive change ahead: governments may ask airlines to consider the interests of a wide range of stakeholders, not just private shareholders. Environmental organizations and other groups have for example demanded that any airlines bailout be linked to conditions such as improved workers’ rights and more action to reduce emissions and tackle climate change. Some governments have already offered bailouts with climate-related conditions.

Stakeholders include the government and local authorities, but also airports, the travel and tourism community and other business sectors, relevant non-governmental organizations, and anyone else who feels their interests are affected. Their voices are likely to become more influential as airlines rely more heavily on state aid. In the travel and tourism industry, there have already been calls to use the crisis as an opportunity to create a more economically, socially and environmentally sustainable tourism model. Something similar could happen in the aviation industry, if we see the current numbers and predictions as an impulse to do better and help shape a brighter future for air travel.


This article was written by Vijay Poonoosamy, Director International and Public Affairs, QI Group and originally published on the World Economic Forum’s Agenda

Vijay Poonoosamy is the Singapore-based Director International and Public Affairs of QI Group, an Honorary Member of the Hermes Air Transport Organisation, a Non-Executive Member of the Board of Veling Group, a member of the International Board of Experts of Rebuilding Travel, of the Advisory Board of the World Tourism Forum Lucerne and of the World Economic Forum’s Strategy Officers Community and Gender Parity Steering Committee. He is also a long-standing resource person for ICAO, IATA and ACI. He was the Managing Director of Air Mauritius, Executive Chairman of Airport of Mauritius, Vice President International & Public Affairs of Etihad Airways and a member of the World Economic Forum’s Global Future Council on Mobility.